Japan proved on three occasions that the little guy can outsmart the big guy. It was widely commented that they were the fittest team at the World Cup. They had two 18-day training sessions where they didn’t see a rugby ball. However, their skills were terrific and reminded us that a fit team drop less balls and miss less tackles.

All of us in the Envest Ecosystem are ‘Japanese’. Every single one of our businesses is competing against someone bigger, more established, with a stronger brand and more capital behind them. So it’s important we continue to work hard and use our size to be more agile and execute more effectively. Largely, we are doing this; our first quarter results prove it. So we’ve just got to keep ‘training’ and strategizing to continue to make meters. 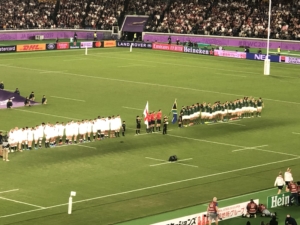 I am going to add an additional paragraph in here before we hit send, as I was even luckier to be invited to the World Cup final by my brother in law and the Under Armor team. With a few Qantas points and a bit of luck I was fortunate enough to make it to Japan but nearly didn’t get into the stadium! I left my printed tickets at a pub I met Chris Madell in (Chris was also lucky to get an invite but in the end not as lucky as me!). I was fortunately able to retrieve the pdf ticket from my phone but it was running out of battery and I only just made it into the stadium in the nick of time. Things picked up from there. It was an incredible atmosphere. So many English travelled and a few Saffas.

What was truly amazing was the number of black South Africans who flew over for the final. It was tremendous to see and had quite an impact on me. I interacted with many if them and shared the pride they felt, that the Springboks were finaly being led by one of our natural citizens. Much like the Japanese approach, the Springboks came with a smart plan and shocked the world, but not themselves. They had spent 19 weeks together. They were galvanised by their love of country and overcoming the challenges of uniting a people of all race, religion and background. I probably didn’t truly appreciate the impact the Springboks were having back home. But watching that green wall repel attack after attack from the English, it became apparent that they were carrying a nation and were never going to lose. It was emotional scenes after the game and the slow wander back, stopping at kiosks and make shift bars on the side of the road; celebrating with fellow countryman, local Japanese and many gracious English supporters is something I will not forget for a long time to come.

But back to business and our strategy for moving forward.  Part of our strategy, like the South African and Japanese rugby teams, is to create a stronger and united brand.  To achieve this Envest has made an investment into a part-time Marketing and Communications Manager, Megan Houston. Megan, working closely with Nichole, is developing a Marketing Plan for Envest, which will ultimately support your businesses. We feel it is the right time to promote Envest and our partners, we have some good stories and we need to make sure they are out there.

The Marketing Plan objectives are to create a framework for smart, strategic marketing to improve the brand, reputations and relationships inside and outside the group.

That means being digitally savvy, clear about the value we add, and connecting online as well as offline.  For Envest it started with the newsletter you’re reading and getting “social” on Linked In, and will develop into an integrated approach to promotion, media relations and events.

Self-promotion doesn’t always sit well with us. But if you can just find the one thing that you do differently to everyone else and make a big deal of it time and again, eventually people will think you are revolutionary.  I recently got a call from a very prominent insurance company wanting to partner with us in many different ways. I didn’t know the guy who called me or anyone personally in their business well. However, they commented several times that we were so active and everywhere with lots of people talking about us. I don’t believe half of that, however I am starting to believe that effective marketing and communication works. Perception and reality are almost always two different things but in today’s digital world you can really control how people perceive you…and that’s a powerful thing!

This is our last edition for this year. I hope you have all enjoyed reading it and found the update informative and fun. We will be talking to you before the summer break but in the meantime run hard through to the end of the year, got to hit the beaches fit…not fat!